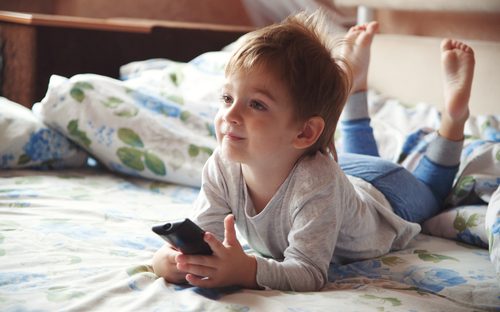 We want to emphasize first that the American Academy of Pediatrics discourages the exposure of children under two years old to television and gadgets, among other digital media. Even then, their exposure should be limited to between one and two hours for their proper development.

Yet another vital aspect we want to emphasize is the right choice in television shows! Keep in mind that children should watch educational programs that teach them literacy, math, and science and problem-solving skills.

These television shows should also teach pro-social behaviors, such as courteous and respectful actions, sharing with others, and confidence.

Indeed, content matters! Parents must ensure that their kids watch educational shows only and for a limited time. When these two aspects are met, watching television provides several benefits for children.

1. Children between two and seven years old who watch educational shows a few hours a week perform better in academic tests over time.

In a study made by the University of Texas in Austin, researchers assessed about 200 children 2-7 years old over three years while tracking their television habits, including the types of shows watched and the duration. Every year, the researchers assessed the children’s reading, vocabulary, and math skills.

The bottom line: Educational shows can boost your children’s intellect and academic performance in pre-school since they have a head start.

Think of television as a medium where your children can learn about topics not typically discussed at school. Learning shows can also reinforce and clarify what they learned at school, a supplementary method of learning if you will.

For example, your son may be keenly interested in mechanical projects and inventions. He will benefit from watching Rusty Rivets or Blaze and the Monster Machines. Your daughter may be more interested in role-playing a doctor, so Dr. McMuffins is an excellent show for her.

They may be unable to see these things for themselves first hand. But thanks to television, they will have an idea of the world beyond their homes and families.

For example, watching Ni Hao, Kai-Lan gives them a peek into Chinese culture while watching Dora the Explorer reinforces their Spanish language skills. Children will then have a better appreciation and understanding of the diversity of people around them.

They have the opportunity to learn from relatable characters whose positive messages will influence them in making the right choices.

Of course, parents should be the first role models of their children because of their vital presence in their lives. When fictional characters on television shows reinforce the parents’ positive messages, children are more likely to learn from them. This is because children think of these characters as their peers and friends, not authority figures.

How do educational television shows provide these benefits for children?

For one thing, these programs use the principle of repetition in teaching children about their letters, numbers, and colors. Children are known to learn better from repeated exposures to the same things because these mean better imprinting on their memory.

Children can store, process, and transfer the information learned from the repetitions to the real world, too. They also like the fact that they can predict the outcomes and the answers because they’ve seen the shows multiple times! Such ability makes them more confident about themselves and more in control of their environment.

So, if your children like to watch the same shows and episodes of, say, Shimmer and Shine, let them be. You may be exasperated about it, but they are learning!

For another thing, these shows use interactivity in teaching children the 3Rs (reading, writing, and arithmetic) and social skills. There are several ways that social interactivity between the onscreen characters and the children can be achieved.

To make the experience engaging for the viewers, the characters look into the camera as if they were in the same room as the children. They also ask direct questions, pause for a few seconds, and then give the correct answer. The pause between the question and the answer gives children the time to formulate their answers.

These interactive techniques are used in shows like Blue’s Clues and Dora the Explorer. The onscreen characters also give their feedback to children, usually limited to positive messages like “That’s right!” “Good job!” and “We liked it, too!”

But the above-mentioned benefits of educational shows for kids can only be enjoyed when parents guide their children! You should consider adopting these tips that will make the most of your children’s viewing time.

You should also encourage playtime and exercise in your children. Better yet, you have to be their role models in limiting screen time! Besides, the best educational shows for kids also encourage them to be more physically active.

Here are the ten best learning shows for kids in the United States. We chose these shows for both their educational and entertainment values, too. Children learn best when they have fun, and that’s a fact!

Milli, Geo, and Bot are friends who live in Umi City and who solve everyday math-related problems using their Mighty Math Powers. They show children that math is everywhere in their daily lives, and it’s useful in understanding their world. They also demonstrate to children that math is fun and funny, so they are eager to learn more.

Team Umizoomi teaches kids to solve simple math problems to develop their mathematical skills. They learn counting numbers, sorting patterns, and measuring things, as well as identifying colors and shapes. They also learn practical ways of thinking through problems that can be translated into the real world.

2. Blaze and the Monster Machines

Blaze, the best monster truck in the world, and AJ, his driver and best friend, live in Axle City along with other monster trucks.

Together, the duo takes on adventures and solves problems using Blaze’s distinctive powers and AJ’s knowledge of science, technology, engineering, and math (STEM). Blaze possesses blazing speed, a turbo boost, and the ability to turn into anything from a hairdryer to a hang glider.  Just imagine your children having fun imagining their monster machines!

By watching Blaze and the Monster Machines, children learn the basics of STEM and how things work because it’s explained to them in terms they can understand.

With a catchy song and dance routine, Bubble Guppies make learning fun for toddlers! The show features Molly, Gil, and their fun friends who go to an underwater school and learn about a wide range of subjects. There are songs and dances, lessons, and laughter about math, science, and arts, as well as social skills for school readiness.

The great thing about Bubble Guppies is the several genres of music it uses to introduce the 3Rs! Your children will sing and dance to original pop, country, and rock songs; a great way of expanding their repertoire.  Your children will also laugh at Gil’s lunches, maybe even ask you to make the food for them.

When Chase, Skye, Rocky, Zuma, Rubble, and Marshall line up in front of Ryder, their boy leader, they will soon embark on an adventure and take the children with them!

The Paw Patrol rescues people and animals in Adventure Bay and its surrounding areas by using their unique skills. Chase, for example, is a police pup with a sharp nose while Skye is a helicopter pup who serves as the group’s eye.

Through their rescue missions, the Paw Patrol encourages children to solve problems through teamwork, become helpful in their community, and respect the natural environment. Children also learn that “no job’s too big, no pup’s too small” and, thus, boost their self-confidence.

Shimmer and Shine teaches children that mistakes are opportunities to become better persons! They learn that they can do better next time by asking their parents and peers for guidance. But they have fun along the way, too.

They also learn about working together as a team, listening to each other, and building friendships, all of which are vital social skills.

Shimmer and Shine are two colorful genies who don’t understand the human world so well. Lea, their human best friend, makes three wishes per episode that they bungle up. The trio then goes on crazy adventures that eventually end up well.

Based on the original Blue’s Clues in the 1990s, Blue’s Clues & You encourage children to play along with the games, answer simple questions, and solve mini-mysteries using Blue’s clues. Josh and Blue, the human-and-animal tandem, use built-in pauses to allow preschoolers to participate in the show.

By doing so, children learn the basics of literacy, math and science, and the arts while having fun. They learn the value of helping others, being observant, and remembering things. Their adventures with Josh and Blue are so engaging, too, that they may even make up games of their own.

Everybody loves Dora, the lovable young explorer, who takes Boots and their other friends to adventures and explorations!

Dora uses the Map in finding their way from Point A to Point B, while also solving problems and meeting new people. Dora is also a great role model because she cares for others and shares her things.

Children learn their letters, numbers, and colors, among others, with each episode. They also learn the Spanish language and all about Spanish culture that boosts their language skills and develops their cultural appreciation. They also develop their physical coordination by singing and dancing along with Dora and her friends, particularly during the “We Did It” dance.

We all grew up on Sesame Street! Today, the classic educational show continues to introduce and reinforce preschooler skills like letters, numbers, and patterns while also encouraging curiosity about the world in children.

The characters like Big Bird, Cookie Monster, and Oscar the Grouch also encourage interpersonal skills, such as respect, courtesy, and tolerance.

Children learn from these characters, too, because of their childlike innocence. They have relatable personalities that kids love for fun, singing, and dancing! It doesn’t hurt that they wear colorful costumes, say funny things, and engage in adventures around the neighborhood, too.

Children feel like they, too, are part of Sesame Street and go along on these adventures.

Where Dora teaches children about the Spanish culture, Kai-lan and her friends introduce them to the Chinese culture.

Kai-lan frequently uses simple Mandarin words to introduce letters, numbers, and colors as well as talk to others. The characters utter many of the Mandarin words and phrases without translations; children learn them in context.

Kai-lan is a peacemaker and amateur therapist. Her “YeYe” or paternal grandfather is always smiling! The first few episodes of “Ni Hao, Kai-lan” teaches self-sacrifice and teamwork.

We have to include Mister Rogers’ Neighborhood in the list because of its significant impact on the above-mentioned shows.

On the show, which is now on reruns, Fred Rogers treats children like little adults who are intelligent and curious, willing to learn from experience or struggle in understanding many subjects.