How Kids See the World

How Kids See the World

As anyone who’s ever had the pleasure of babysitting knows, we don’t come into this world fully formed. Our bodies, our personalities and especially our minds evolve significantly throughout the first five years of our lives, driven by our growing capacity to learn and the anatomical development of our brains. Along the way, there are a few milestones that are more prominent than the rest in shaping how kids see the world.

Milestones From Birth to 5 Years Old (1)

People are born with all of the brain cells — or neurons — that they’ll have for the rest of their lives. Brain development involves making connections — or synapses — between these neurons, which enables complex movement, communication and thought. As unassuming as it may appear, this is exactly what babies are doing when they play, babble and smile. That’s why the behavior they exhibit at certain ages is so important: It reflects their internal development. Babies first build new synapses, then strengthen the useful ones, while allowing the lesser used ones to weaken. This is how, for example, the cacophony of babbling is refined into language.

By 4 Months
Development of vocalization continues, with new means of interacting with and understanding surroundings

By 6 Months
First connections between signifier and signified, as well as continued development of language and physical coordination

By 1 Year
Improved understanding of abstract concepts and language, along with refined motor skills

By 18 Months
Beginnings of coherent spoken and gestural language, plus first forays into writing

By 2 Years
Ongoing practice with signifier-signified, verbal language and interpretation of surroundings

By 3 Years
First broad tests of comprehension and response, combining language and behavior

By 5 Years
Mastery of basic spoken language, as well as introductions to time and written language 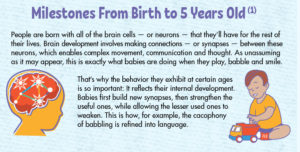