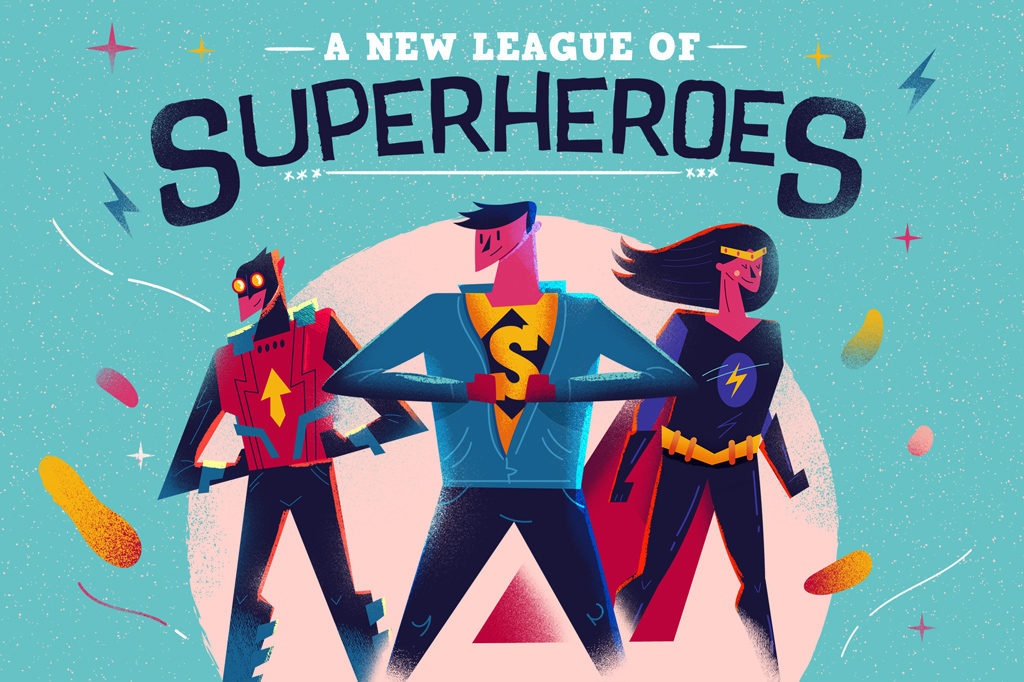 CHILDREN CREATE SUPERHEROES TO MAKE THE WORLD A BETTER PLACE

The world needs heroes more than ever. And while real-world heroes are stepping up in all sorts of unlikely places, fictional superheroes help us dream of more colorful times. In fact, superheroes are the modern mythology that helps us think about making the world a better place.

But Best Kid Stuff reckons the superhero landscape needs some fresh ideas. And who has better ideas for comic books/making the world a better place than kids? So we employed 10 pint-sized dreamers to invent 10 new superheroes for the 2020s.

Our comic book kids began by drawing their original ideas for superheroes. Then they told us all about each hero’s superpowers and quirks. Finally, our designers smoothed the edges so that all 10 characters can occupy the same league of superheroes. Read on to find what each superhero contributes to making the world a better place!

Our oceans are valuable, and there can’t be too many underwater superheroes in the world. OSHH is a super-modern superhero whose gun sucks up plastic from the ocean and turns it into oxygen. The hero’s wetsuit is camouflaged to keep him safe, and – this is very cool – his rocket boots not only help him to swim faster but to walk along underwater cavern walls.

The Atomic Age gave us The Atom. The Coronavirus Age? Rosie the Rainbow Sparkle Covid Nurse! When she chants “Rainbow cat power!” her cat Shadow shoots rainbows at all the naughty Covid, transferring it to Rosie’s hair bow for safe storage. Rosie also has a dragon called Spark, mostly for good company.

Another very timely hero, Super Ice’s stated objective is to put out forest fires by flying above and shooting water bombs. This is especially brave when you consider he’s made of ice! Thankfully, Super Hielo can recharge and make himself giant by drinking river water. Super Ice’s four-legged friend is a giant ice dog who shoots icy x-rays from his eyes.

Like a subaquatic Batman, Sea Rescuer uses gadgets and wit to rescue people instead of relying on supernatural powers. Gadgets include powerful arm and leg flippers and a light-emitting disk on his chest for seeing in the dark or stormy weather. Despite his name, Sea Rescuer is willing to diversify into ocean, river, and lake rescue.

Swashbuckler Man’s golden sabers are this masked hero’s special feature. If he throws them, they come back, and they have the power to surround Super Espadachín’s enemies with power rays! While he can’t fly, Swashbuckler Man is very good at jumping and can spin and tumble in the air to gain an advantage over even the biggest of foes.

The world’s doctors do a stunning job, but it’s harder than ever to get an appointment. Step in Super Doctor – there’s no waiting on hold because she senses sick children telepathically! Before you can say ‘home visit,’ Super Doctora will arrive on her flying board with her super magical backpack full of healing tools. If the patient wakes up during treatment, Super Doctor’s fairy sidekick will keep them amused with stories and jokes.

¡Vamos! Idemo! Вперед! Whatever language you use, there’s no more thrilling call to action than “let’s go!” This is the catchphrase of Andrey, 6yo Nadya’s unpretentious flying superhero. Tune in each week to see Andrey yell “superpower – let’s go!” at his normcore sidekick, Mike.

Who needs a sidekick when you can clone yourself? Crypton wears green stormproof spandex and can multiply himself to help more people at once. And thanks to his teleporter watch, he needn’t waste money on multiple airfares to get him to where he’s needed. Crypton uses his superpowers to heal people and nature, getting rid of hurt and making the air smell better.

Do you ever secretly wish for a superhero to come save you? Keep wishing! Vanessa can read minds and uses her antennae to detect when good people need helping and bad people need stopping. She might not be able to fly, but Vanessa can jump really far, and her coterie of small fairies and elves are never far behind her.

Somewhere in England, a mysterious farmer grows a coat of wool at a moment’s notice to become – Sheep-Man! Sheep-Man roams the fields on his Super Tractor (sheep don’t fly) with sidekick Lamb-Girl, protecting farm animals by shooting wool at aliens and baddies. Origin story? Bitten by a sheep.

Now you’ve seen how powerful these superheroes are as individuals, just imagine what they can achieve when the league together to defeat [checks list] – plastic, illness, drowning, forest fire, bad smells, aliens, and all-round villains! Which hero would your kid most like in toy form? Maybe they can draw some super-villains to remind us why we need to work together to make the world a better place!