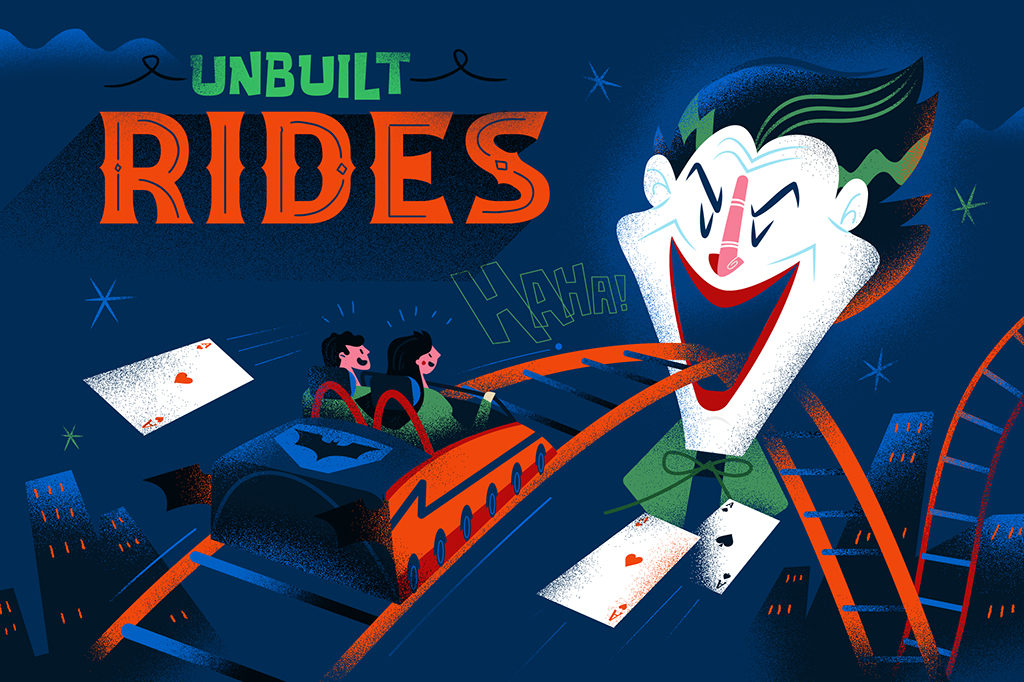 THE THEME PARK RIDES THAT COULD HAVE BEEN

Movie and comic book theme park rides are the closest most fans will come to experiencing the fantasy worlds of their heroes and villains. The adrenalin rush of the ride is perfectly tuned to the thrilling visuals and imaginative plot turns of their fictional realms.

But these rides are missing one thing. Part of the joy of a comic book universe is the tantalizing mystery of the beyond. The fact that you can’t reach out and touch it.

This feeling finds its perfect expression in the world of abandoned theme park ride designs: stunning and mysterious scraps of design history that never quite made it to production.

Best Kid Stuff wondered what some of these rides might have been like if they’d got the green light. So we made a series of realistic 3D renderings based on Disney and Universal ride designs that got ditched. Tickets, please!

Batman vs. The Penguin (Universal)

Danny DeVito starred as Penguin in the 1992 follow up to Tim Burton’s hit Batman flick. Universal considered capitalizing on the movie with a Bat Wing-themed ride along two dueling roller coasters – guests could choose whether to fly as Batman or Penguin. Both tracks would emerge from beneath the ground: the BatWing from the Batcave and the PingWing from “the Penguin’s subterranean realm.” The vehicles would then chase each other in and out of Gotham City’s buildings, with several carefully choreographed near-misses.

A clash of interests between Warner Bros. and Universal is probably what prevented the ride from happening. It’s abandoned designs were probably incorporated into the Dueling Dragons attraction that opened at Islands of Adventure in 1999.

When Disney’s Horizons attraction faltered in the early ‘90s, the company thought about transforming it into a space-themed pavilion. Visitors would hang from overhead rails in space jetpacks – more accurately, close replicas of NASA’s Manned Maneuvring Unit. Your jetpack would carry you through a two-mile spacewalk utilizing the full height of the massive Horizons building.

Unfortunately, the project never achieved take-off. The complicated design of the track meant that the visitor capacity could never have met the presumed demand for such an adventure.

Joker’s Madhouse was another victim of Universal’s aborted partnership with DC. Visitors would find a giant Joker face behind Gotham City Hall, and when its eyes settled on you, the mouth would open to let you in. You would then queue through Joker’s warehouse, entertained by the baddie’s villainous gags and gadgets while you waited.

Once onboard, visitors would ride the Joker’s rollercoaster through a psychedelic vision of Gotham, scared and amused by the villain’s surprise gags. The last laugh? Joker forgot to finish the ride, and visitors find themselves hurtling towards a dead-end…

If you know The Amazing Adventures of Spider-Man at Islands of Adventure, it will surprise you to discover its storyline was originally intended for a Superman ride. Islands of Adventure had been slated to be a DC Comics park, rather than Marvel. Much of Amazing Adventures was already storyboarded for Superman – for example, the Daily Bugle section was originally drawn as The Daily Planet.

Visitors would ride an 18-passenger pod (cf. Spider-Man’s S.C.O.O.P. vehicle) up into the Planet’s telecopter to go look for a news story. Of course, the news hunt goes awry, and the telecopter ends up dancing with Lex Luthor’s flying death machine. You even see earlier guests emergency-eject from their pod to evade Luthor’s blasts. Well, who’s going to save them?

Eighty years after its release, Fantasia remains the ultimate Disney picture: an avant-garde musical extravaganza remixing the mythologies of classical symphonies and the Disney cartoon universe. Fantasia Gardens was first mooted as a theme park boat ride in the 1960s and nearly replaced Magic Kingdom’s Swan Boats in the ‘80s.

The boat ride would have been part of Beastly Kingdom, a part of Disney’s Animal Kingdom that ended up never being made. And it would have been a rich musical experience, probably more enchanting than thrilling. Unfortunately, the project was pulled along with the Beastly Kingdom. There has still never been a Fantasia theme park ride.

It’s sad that these grand designs were never realized, but seeing their abandoned concept art is like finding a lost comic book that nobody knew existed. Which unbuilt theme park ride most keeps you gripped to the handlebars?